Instant Music Now and the PBTM Library was started in 1988 by Mike Brewer and another musical writer, and quickly became one of the most popular Royalty Free Music libraries. The success was mainly due to the fact the unlike some of the other sites around, all of the song selections were created specifically as Royalty Free Music for the library. There are also a few selections of popular public domain themes available all Royalty Free to the purchaser. 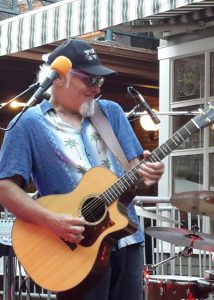 Michael G. Brewer (aka Mike Ayling), was born on Oct.19, 1952 in Los Angeles California. He began studying piano beginning at age 6 and then guitar by the age of 12. He performed his first paid engagement by age 14 and his first record album by the age of 16.  Michael played in several groups in the Southern California area from 1967 to 1971. Mike found himself recording and performing with some of today’s most respected musicians in the early 70’s including Producer David Foster, keyboardist Booker T. Jones (of the MG’s), as well as the rhythm section of the original Elton John group, Nigel Olsen and Dee Murray . Michael moved to the Pacific Northwest in 1977 and built an exclusive multi-track recording studio from the ground up. Mike has designed and built several studios as well as honing his recording skills with the logging in of over 15,000 recording sessions.

The original and Rare 60’s album of the

Mike Brewer is the original singer and Co-founder of the Mary Butterworth Group. In the Spring of 1968 the Mary Butterworth band was formed. They enjoyed playing a variety of engagements around the Southern California area and in 1969, the recorded the one and only album entitled Mary Butterworth. This original, vinyl album was pre-sold to fans and friends only– it was never available to the general public. Shortly thereafter, the group split up and never performed together again.

Years passed and rumors spread that Mary Butterworth had made it big. However, that was not the case. What did happen was that one of those original vinyl albums made it into the hands of “bootleggers” in another country. They thought enough of the music to reissued the album, and they began a sales campaign of their own. It didn’t stop there. The Butterworth album has been bootlegged at least three other times in two different countries.

The bootlegging has created a Mary Butterworth following and pushed the price of the original vinyl album to over $2,000.00 per vinyl album. The Psychedelic Rock Music of the ’60’s is still regarded, even today, as some of the greatest live music ever created — and Mary Butterworth will be a lasting part of that history. The CD also includes many photos of the group and like the original vinyl album, it’s bound to be a collector’s item. Now you can find out why.